The Dade City Police Department has a new K-9 team — with Officer Kevin Burns and his new partner Tyke.

Burns is a 12-year veteran of the Dade City Police Department. He hit the streets with Tyke on June 5.

The city had operated nearly 15 months without a K-9 team.

The team was introduced to the public at the Dade City Commission meeting on June 13.

The tandem is fresh off a demanding 16-week training course in patrol procedures and tracking, sponsored by the Pasco County Sheriff’s Office. 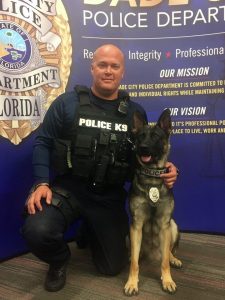 Tyke is a 16-month-old German shepherd. Officer Kevin Burns, a 12-year veteran of the agency, is his partner. They hit the streets together on June 5, after a demanding 16-week training course.
(Courtesy of Dade City Police Department)

During the course, K-9s are trained to ascend obstacles, negotiate water bodies and follow their handler’s commands, among other tasks.

The new unit will become an integral part of the police department and the community, acting as a “force multiplier” capable of searching buildings and tracking suspects, missing children and vulnerable adults.

After a year on the beat, the K-9 unit will be sent to a narcotic detection school to receive dual-certification from the Florida Department of Law Enforcement.

“I had somebody ask me why we needed a dog, and we happened to be in a bank building, and I said, ‘Well, put yourself in an officer’s shoes when it comes to this bank building at 3 a.m., and that door is wide open and the alarm is going off. Do you want to go in by yourself, or do you want to send something in that’s got a better sense of smell?”

Tyke, imported from Slovakia, cost about $9,000. Supplies and equipment costs — kennel, vests and leashes, among other items — totaled another $1,500.

Since a police dog wasn’t included in last year’s budget, the agency sought outside assistance.

The department received several thousand dollars in donations from a number of local organizations and businesses, including the Kiwanis Club, the Rotary Club and many private donors. It also led to the formation of the Dade City Police Foundation, a private 501c3 nonprofit organization.

“Because this dog was purchased through the generosity of the community, I want him to be much more visible to everyday citizens than teams in the past. He will not only be used on patrol, but will be seen interacting downtown and in the schools,” the police chief said.

For Burns, joining the K-9 unit and handling Tyke has been "life-changing."

"We still have a lot to go and a lot further to see and do, but just in the four months that we’ve had training, he’s not only my partner, he’s an officer of Dade City and he’s a family member, too," Burns explained.

Even in a decade-plus law enforcement career as a patrol officer, Burns didn’t realize the undertaking of a K-9 team — from intensive training to daily tasks.

"Mentally, it’s challenging," he said, "because you have to be able to read him. 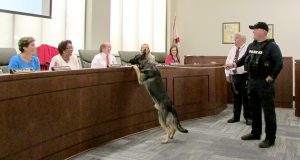 Tyke gets up close and personal with Dade City council members. Tyke and his handler, Officer Kevin Burns, were formally introduced to the public on June 13.
(Kevin Weiss)

"He’s the one doing the work, we just train him. Learning how to read him, (the job) is probably 80 percent mental and probably 20 percent physical."

The police chief received a handful of applicants inside the department, and collaborated with the Pasco County Sheriff’s Office to conduct interviews, along with background checks, performance reviews, physical assessments and home assessments.

"It was a long, exhausting process," Velboom said. "We wanted to make sure we had the right fit."

"We sent a team out to his house…to make sure the family’s okay with it and the house is okay," he added.

For over a year, the Dade City Police Department operated without its own K-9 unit.

Chris Stone, a 14-year law enforcement officer, and his K-9 partner, Ryko, worked together for eight years before retiring as a team in March 2016; Stone now works for Pasco County Fire Rescue.

Meantime, the agency received K-9 assistance from both the Pasco Sheriff’s Office and the Zephyrhills Police Department.

"The county provided a K-9 service for us whenever we needed it, but it’s always nice to have your own dog," Velboom said.

Velboom acknowledged a second police dog could be added at some point, dependent on budget and fundraising efforts.

Police dogs are typically retired after nine or 10 years, due to hip issues.

"It’s a tough job — riding in a car for 12 hours a day, jumping out and running," Velboom said.